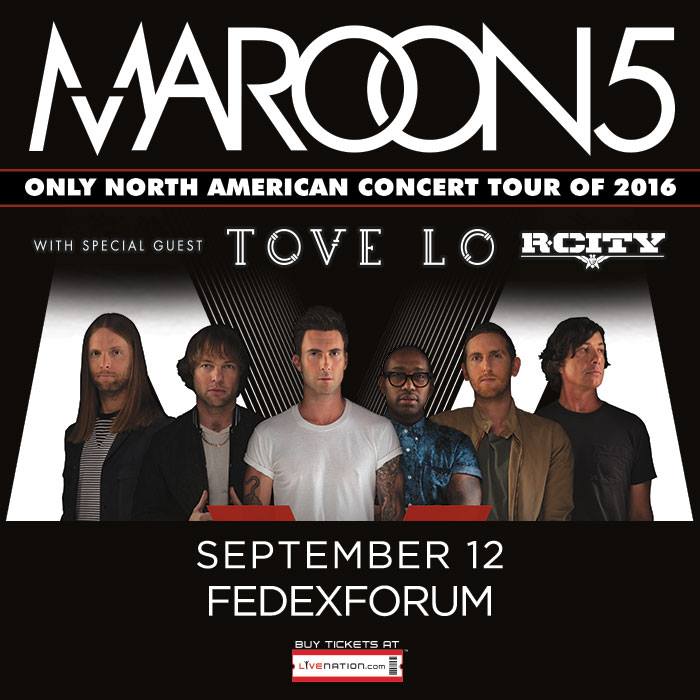 MAROON 5 RETURNS TO THE ROAD FOR THEIR FALL TOUR 2016 SLATED TO HIT FEDEXFORUM ON SEPT. 12

Tickets will go on sale to the general public on Friday, June 3 at 10 a.m. Tickets can be purchased at all Ticketmaster locations, ticketmaster.com, livenation.com, via the Live Nation app, at the FedExForum Box Office, or by phone at 800-745-3000.

Currently, three presale options are available before the national on sale. Beginning tomorrow, May 24, there will be an exclusive presale for American Express® Card Members starting at Noon. A fan club presale will also begin tomorrow, May 24 at 9 a.m. A Live Nation presale will begin on Thursday, June 2 at 10 a.m.

Capturing their first of three Grammy Awards as “Best New Artist” of 2005 and going on to sell more than 17 million albums worldwide, Maroon 5’s releases have gone gold and platinum in over 35 countries. The band won over fans and critics alike with the hybrid rock/R&B sound they introduced on their debut album, Songs About Jane and their double platinum album, It Won’t be Soon Before Long, which included hits like “Makes Me Wonder” and “If I Never See your Face Again.” In 2010, the band released their third studio album, Hands All Over, which featured the group’s anthemic chart-topping smash single “Moves Like Jagger.” The song has since gone on to become one of the best-selling singles of all time. Maroon 5’s fourth album Overexposed quickly reinforced the group’s status as a powerhouse in popular music with all of its singles rising to the top of the charts and setting an all-time record for the most #1s (six in total) by a group in the Top 40 chart’s 20-year history. In conjunction with that album, Maroon 5 wrapped one of the highest grossing tours of 2013 with over 50 million dollars in ticket sales.

Maroon 5’s current album, V, debuted at #1 on Billboard’s Top 200 chart and features the hit singles “Maps,” “Animals” and “Sugar,” all of which hit #1 on the Top 40 chart. Rolling Stone said of the album, “Adam Levine and Co. continue their top 40 takeover with a set of irresistibly sharp hooks…The 11 songs here are precision-tuned and lustrously polished, jammed with hooks and choruses that build a man cave in your brain.” The music video for the band’s chart topping and GRAMMY- nominated single “Sugar” has logged one billion views to date. Maroon 5’s world tour kicked off in the US in February 2015.

A Latin American leg is scheduled for this summer, along with a U.S. run starting on September 3. By the time the tour wraps, the band will have played over 120 concerts in 30+ countries with more than 2,500,000 fans in attendance.